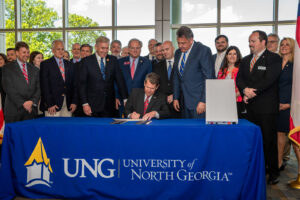 Gov. Brian Kemp signed Senate Bill 2 in to law on April 26, 2019, during an event held at the University of North Georgia in Dahlonega.

Championed by Sen. Steve Gooch (R – Dahlonega) and the late Rep. Jay Powell (R – Camilla), Senate Bill 2 provides legal clarity to Georgia’s EMCs, giving them the ability to consider how they can participate in efforts to improve broadband access in their respective communities.

Removing barriers for the expansion of broadband to rural Georgia has become a top priority for state lawmakers, recognizing that a lack of high-speed internet is a barrier to quality education, economic development, telemedicine and improved quality of life for many Georgians. Without access, new and growing businesses, entrepreneurs and others are likely to flee areas that lack broadband, putting rural Georgia at a tremendous disadvantage.

While lawmakers, business leaders and opinion leaders agree broadband is one important element that could help put rural Georgia on the path to prosperity, the cost to build fiber networks combined with rapidly changing wireless technologies creates significant challenges for extending broadband service to the expansive and lesser populated areas of the state. For that reason, each of the 41 EMCs in Georgia will need to work with their board and members to explore the potential challenges and opportunities in their respective communities.

Some EMCs may find offering broadband directly to members is not feasible due to operational or budgetary challenges. Others will likely rely on partnerships with established companies and existing providers rather than provide direct-to-consumer broadband services. And in some cases, many of an EMC’s members may already have high-speed internet service. Regardless, the passage of Senate Bill 2 encourages continued dialogue among a variety of stakeholders to identify the best and most efficient way to expand broadband service.

After more than a decade of debate, the Georgia Legislature passed the Georgia Broadband Opportunity Act in 2020, sending the decision of pole attachment rates to the Georgia Public Service Commission (PSC).

In December 2020, the PSC voted unanimously to take steps to advance rural broadband deployment in our state. Commissioners voted to require electric membership cooperatives (EMCs) to give qualified broadband providers access to their utility poles for new attachments in unserved areas for $1 per pole per year. The promotional rate is available to broadband providers for six years—an unprecedented incentive to promote high-speed internet expansion.

Equally important, the PSC’s decision protected more than 4 million EMC member-owners from the possibility of an energy rate increase by establishing a fair pole-attachment rate in areas of the state that already have broadband service. The commissioners came to this decision following a comprehensive rate case held over the Fall of 2020, during which they learned the true cost to an EMC and its member-owners of owning and maintaining utility poles.

Before the Georgia Broadband Opportunity Act passed in 2020, the cable industry lobbied for years to lower EMC pole attachment rates to the heavily subsidized FCC rate, which would be unfair to EMC member-owners who pay for the cost of the pole infrastructure. The rates that EMCs charge cable and internet providers to attach their cables to our infrastructure are calculated using a formula intended to fairly recover the cost to acquire, install and maintain the power poles and right of way. Renting the use of EMC members’ privately-owned assets is a common and fair nationwide business practice.

For decades, the cable industry has attached its cables to the utility poles of investor-owned utilities at the FCC rate, which is substantially lower than the true costs to acquire, install and maintain these poles. This low rate was federally mandated by the FCC with the goal of expanding cable when it was just getting started in the 1970s.

States like Delaware, Louisiana, Indiana, Washington, Maine and Arkansas, and the federal regulators at the Tennessee Valley Authority (TVA) who set the pole attachment rate for cooperatives in portions of Alabama, Georgia, Kentucky, Mississippi, North Carolina, Tennessee, and Virginia all considered the same issue. Like Georgia, each of these states and the TVA also rejected the FCC rate in favor of a cost allocation formula that treats consumers, EMC member-owners and cable companies fairly.